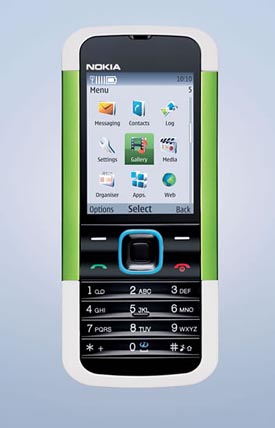 The newly announced Nokia 5000 candybar phone has the same appearance as so many other multimedia-centered phones in the Nokia 5000-series. As with handsets like the 5300, the Nokia 5000 is mostly white and black, with the exception of a color accent flanking the display on either side. In this case, they’ve gone with green.

Interestingly, the Nokia 5000 does not have the XpressMusic controls on their flanking green strips, opting instead for a more generic keypad layout. There are no dedicated music controls to speak of on this phone. Key features include a 1.3 megapixel camera, QVGA display, FM radio, MP3 ringtones, Bluetooth, and GPRS.