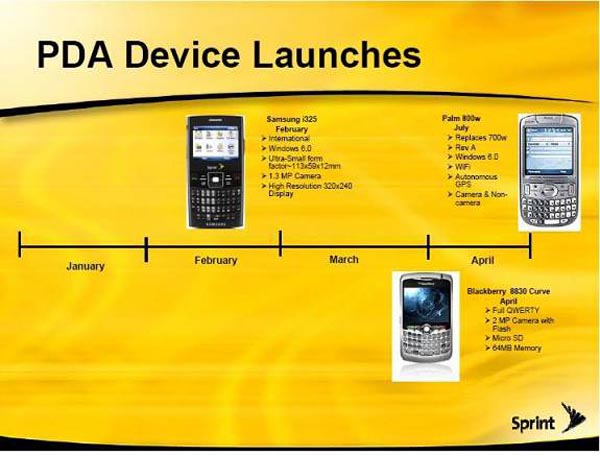 Chalk this one up in the rumor column, but it seems that Spring is going to get its successor to the Palm Treo 700w this July. Appropriately named the Palm Treo 800w. this smartphone device is equipped with a full QWERTY keyboard and it gets its operating system courtesy of Microsoft. In case you didn’t figure it out from previous Treo devices, the “w” at the end signifies Windows.

According to the leaked road map, the Palm Treo 800w destined for Sprint this July will be powered by Windows Mobile 6.0, though industry pundits say that by that time, getting powered by Windows Mobile 6.1 is more likely. Other features noted in the road map include high-speed EVDO Rev.A data, integrated WiFi, autonomous GPS, and your choice of a camera or non-camera version.

This could represent the first time that a Palm smartphone is equipped with GPS and WiFi right out of the box. Oh, and in case you’re wondering, that’s the BlackBerry 8830 Curve shown in the bottom right, attached with a tentative April launch date.