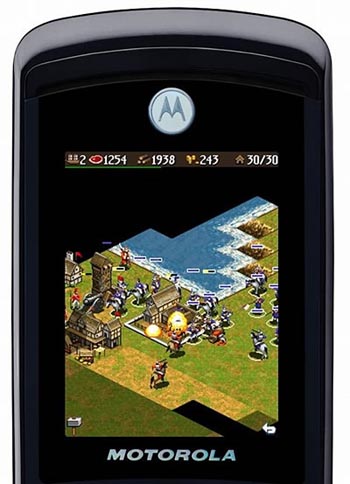 Remember when cell phone games first emerged on the market and everyone was so excited about the Snake game that came pre-installed on our monochrome Nokia handsets? My, how times have changed. For people in search of a real-time strategy game for their mobile phones, Glu Mobile is coming to the rescue with Age of Empires III Mobile.

Developed and published in partnership with Microsoft, Age of Empires III Mobile lets you explore the New World, build new civilizations, and conquer rivaling colonies. The ultimate goal, of course, is to build up one crazy empire. The mobile version is essentially a miniaturized take on the PC game, offering “a variety of historical battles in skirmish mode.” One of the extended campaign modes “serves as a prequel to the Age of Empires III PC game.”

If you thought trying to play RTS on a console was hard, imagine the control scheme on a mobile phone!