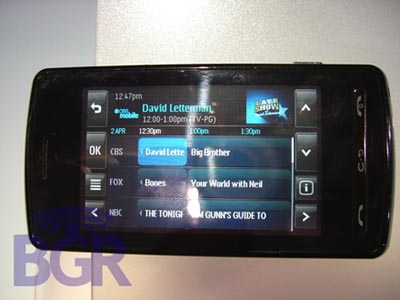 Last week, news broke out that AT&T would start to offer live television on their mobile phones via MediaFLO and now we can actually see the thing in action. Pictures have been revealed with MediaFLO running on both the LG Vu and the Samsung Access, both of which were announced only a short while ago.

MediaFLO will over a high-quality live television service that operates separately from teh standard cellular data networks. As such, handsets that will make use of the technology need to be modified to include the “dedicated guts before they can receive the service.” This is not a TV service that will work on all phones, but few seem better suited for MediaFLO than the LG Vu. That three-inch display is going to good use.

According to people who have had some hands-on time, menu operation is a “joy” and reaction time between channel changes is “not bad at all.” The initial AT&T MediaFLO offering will consist of six standard channels along with two exclusive AT&T channels.