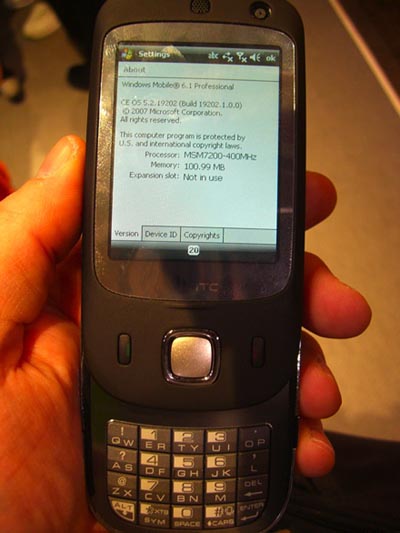 Part of the reason why I’ve been hesitant to pick up an HTC Touch Dual is that the existing unit is only tri-band, missing out on that all important 850MHz frequency that comes in so handy around these parts. Soon, I won’t have an excuse other than I’m too cheap to spend that kind of money on an unlocked phone.

At this year’s CTIA Wireless conference in Las Vegas, HTC announced that they would be bringing a North America-friendly version of the HTC Touch Dual, including not only quad-band GSM radios, but also America-friendly HSDPA. HTC has also indicated that the version coming here will have the 20-key SureType keyboard, rather than the 16-key numeric keypad. The operating system on this beast will be Windows Mobile 6.1 Professional, but that will be overlaid with TouchFLO.

No price has been revealed at this time, but the HTC Touch Dual should be arriving at a Best Buy near you some time this quarter. That’s mighty soon!