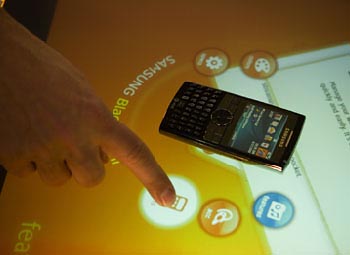 We’ve been anxiously awaiting the wide deployment of the Microsoft Surface computer for a long time now and it seemed like this thing was never actually going to make it into the real world. Sure, we’ve seen the demos at CES and other trade shows, but when is revolutionary table-top supposed to make it to a place where it will be useful?

We were told that Las Vegas hotels were interested in the Surface, but AT&T retail stores are actually going to be the first place where we’ll see the Microsoft Surface. The idea, as you can imagine, is to “enhance” the customer experience and hopefully get more customers through the door. Presumably, customers will be able to place their AT&T phones onto the surface and, well, do stuff with it.

The Microsoft Surface will be found at select AT&T stores starting April 17. The first cities to get the table-shaped computer will be New York, Atlanta, San Antonio, and San Francisco. If this initial test goes well, then AT&T will order some more for the rest of their stores. The touch displays will have three main sections: L for Learn, E for Explore, and C for Customize.