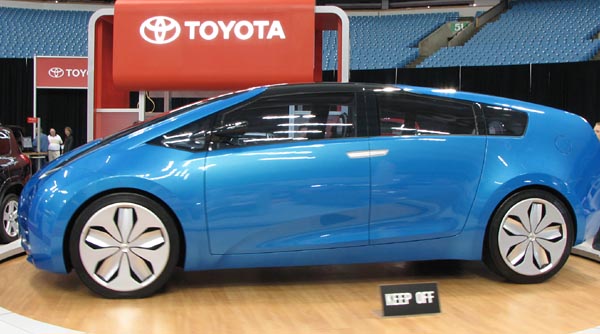 Over at the Vancouver International Auto Show, Toyota is featuring their Hybrid X concept, a vehicle that is supposed to provide the ultimate “environmentally enhanced” driving experience. I’m not entirely sure what that means, but it seems that this four-seater comes equipped with the same Hybrid Synergy Drive as the popular Toyota Prius. In fact, the basic profile of the Hybrid X is not unlike a “stretch limo” variation of the Prius.

Toyota is saying that this car represents their vision of the future, “one in whcih vehicles are step closer to the ultimate environmental technology.” The placard next to the vehicle reads:

The Hybrid X — a four-door, four-seat vehicle — combines Toyota’s vibrant clarity design philosophy with Japanese design and cultural form, known as J-Factor. The Hybrid X features an open-concept interior that is further enhanced by a massive glass upper frame. The roof and the “A” and “C” pillars create two “U” shapes which together give the impression of an “X”; hence, the concept name Hybrid X.

Beyond this, the Hybrid X gets LED interior lighting, an interactive navigation system, and a scent diffuser, just in case Billy had too many burritos for lunch.