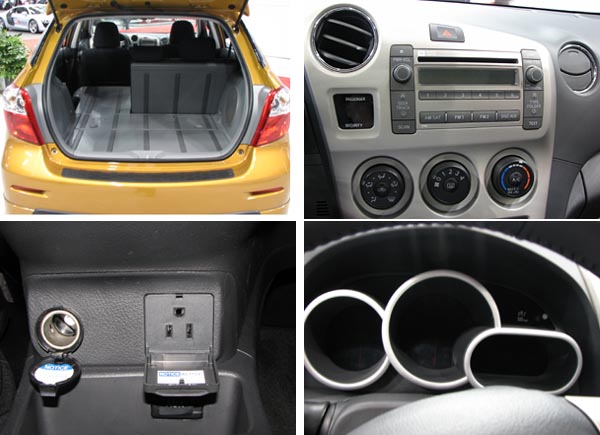 The 2009 Toyota Matrix has been completely redesigned both inside and out, getting outfitted with all sorts of new goodies for the mini-wagon lover in all of us. The new version of the Matrix appears to be less station wagon-like in nature, taking on an outward profile more like a five-door hatchback. As you know, the Matrix is co-developed with General Motors, the latter of which gets their flavor as the Pontiac Vibe.

I had the chance to sit down with the 2009 Toyota Matrix XRS at the Vancouver Auto Show and while the interior still feels like a Corolla, there are several creature comforts that are actually kind of nice. For instance, the gauge cluster doesn’t have a three circle configuration anymore, going instead of a oval for the far-right cluster. That’s just… weird.

The heating and air conditioning system is controlled through three knobs in the center console, above which you’ll find the controls for the MP3/WMA-loving stereo. To the left of that is a small area labeled as “passenger security.” I think that’s a reminder for seatbelts. Personally, I think the coolest thing is in the lower part of the dash near the shiftknob. There, you’ll find a standard 110V power jack, not unlike the one you’d find in the wall of your home. It’s an inexpensive inclusion, but a welcome one.