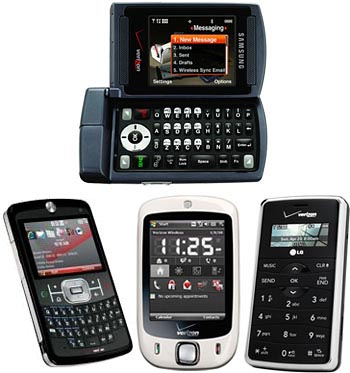 If you love nothing more than QWERTY keyboards for all your text messaging needs, Verizon Wireless has you covered with four new phones, three of which sport QWERTY and the fourth comes with a touchscreen display.

Starting at the top is the Samsung Alias, which acts as the successor to the hugely successful twin-flipping Samsung U740. Looking at the spec sheet, things look pretty much the same except for the color of the device and the improved keyboard. Pick up the Alias for $130 with a contract and a rebate starting in mid-April.

On the bottom left is the Motorola Q9c. By and large, this is the CDMA equivalent to the Motorola Q9h, which has been available through GSM providers for a little while now. This one goes for $250 with an additional $100 getting knocked off with a qualifying data plan.

Moving along the bottom row, we have the HTC XV6900. Better known to most folks as the HTC Touch, this Verizon-bound model is a little peppier with 256MB ROM and 128MB RAM. The rest of the stuff, like the 2 megapixel camera and 2.8-inch touchscreen, remain the same. Pick ‘er up for $350 with contract.

Last but not least is the LG enV2. As can be expected this flip phone is similar to its predecessor, except LG has made this version slimmer, given it larger keys, and a bigger internal display. Pick one up in April for $130 with contract.