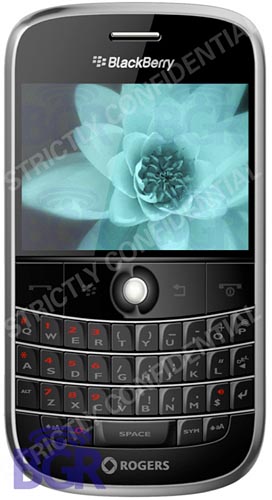 Not very much has been confirmed about the BlackBerry 9000, but one of the underground ninjas at Research in Motion has decided to leak some info for us to consider. He’s gone hands on with the highly anticipated handset, providing all sorts of first impressions.

For starters, most of the rumored specs are holding up to the real world test. This means that the BlackBerry 9000 is equipped with a speedy 624MHz processor, 480×320 screen, GPS, Wi-Fi, and 3G. Combining all of these things, the tipster found that the web browser is very fast, loading “web pages in 3-4 seconds.”

In its current state, the BlackBerry 9000 is running on OS 4.5, though that may change before the device launches with AT&T on or around June 18th. Even so, it might be delayed, bumping that date until later on in the summer. He also notes that the internal memory is either 256MB or 128MB.

The biggest downer is the battery life. The RIM ninja only got four hours of continous talk time. Using Wi-Fi, he was only able to get “a little less than two hours browsing the web.” As a result, he has no qualms about saying that the “battery sucks, to be honest.”