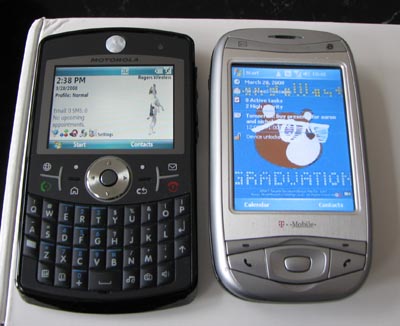 The UPS guy came by my house this morning to deliver a package from the good people at Fido. It’s the new Motorola Q9h smartphone, one of the two Windows Mobile devices recently launched by Canada’s dog of cellular provider. My initial impressions are that it’s quite a bit wider than I expected, but they’ve managed to keep the profile reasonably slender.

Booting up the device, I was initially shown a Motorola logo, then a Fido logo, then the Windows Mobile logo. I guess all three companies wanted their three seconds of fame. Having been accustomed to a touchscreen PocketPC device (T-Mobile MDA), navigating through the menu without touching the screen was a little off-putting. This was furthered by the fact that Fido did a little branding of their own with the phone.

I’m still getting accustomed to the ins and outs of this device — I’m already having trouble getting it to sync with Gmail, although Hotmail works fine — but I hope to have it all worked out by the time I got to ship this thing back. Expect the full review in the next week or two.