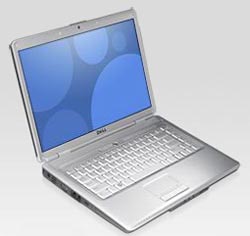 And Blu-ray just got a little bit cheaper. It wasn’t all that long ago that buying a notebook with Blu-ray meant that you had to break the bank a little, but that’s not the case anymore. Dell is now offering their entry-level Inspiron 1525 laptop with optional Blu-ray disc playback starting at just $879.

This notebook certainly won’t win very many awards for its design or raw processing power, but it’s a quantum leap into high-definition that you can enjoy Blu-ray on this thing for less than a grand. Unfortunately, the computer will only be able to play back you Blu-ray movies at 720p resolution on its 15.4-inch widescreen, rather than the full 1080p resolution that you’d much rather enjoy. Alternatively, you can send that Blu-ray goodness over to a bigger TV via HDMI.

One of the biggest hurdles would be how the integrated graphics handle the high resolution of Blu-ray. Well, Dell says that this lappy makes use of a built-in Broadcom Media PC accelerator located in the mini-card slot.