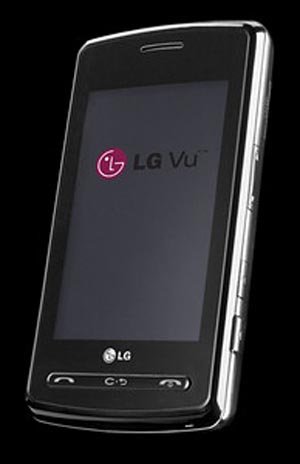 As Canadians anxiously await the arrival of the iPhone north of the 49th parallel (creating websites dedicated to the cause in the meantime), they now have another option when it comes to a phone that boasts only a couple of physical keys, relying instead on a touchscreen interface. The HTC Touch is already firmly established on Canadian soil, but Rogers has just announced that they will be picking up the LG Vu as well, another touchscreen phone that competes in the same market as the iPhone. You know, if the iPhone was officially available in Canada in the first place.

Set for launch in early May 2008, the LG Vu is a touchscreen device that makes great use of its extra large display for mobile web browsing (I can see the data charges now). As expected, it takes advantage of the Rogers HSPA network and can be mated with the variety of Vision Plans, including Video on request, Radio on request, Mobile TV, and Rogers Music Store. Rounding out the specs is the 2 megapixel camera.

No word on pricing, but Rogers sounds pretty proud of this addition, saying that the LG Vu is “a truly formidable device for gadget enthusiasts and style lovers alike.”