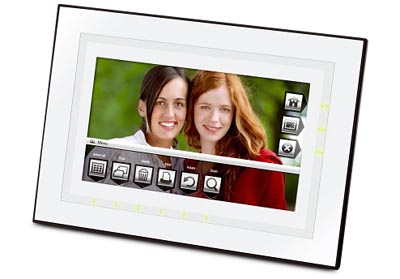 It’s a little bit of deceptive marketing, but you probably wouldn’t want to have fingerprints all over the faces of your loved ones either. The newly announced Kodak Quick Touch photo frames may look like they lack any physical buttons and that’s because navigating through your pictures is done through the touch-sensitive controls that surround the border of the display.

You might still get a few errant fingerprints on little Jimmy’s face, but that would probably be better than having greasy fingerprints all over the place. The border acts as a touchpad and you scroll through your photos with a swipe of the finger. They support all major memory card types and they can take on USB drives as well. If you get tired of just stills, the $180 M820 and $230 M1020 also support MP3 and MPEG video playback.

For those of you who want to cheap out a little, there is also the $120 Kodak P720, but that unit lacks the multimedia end of things and it won’t read CF cards.