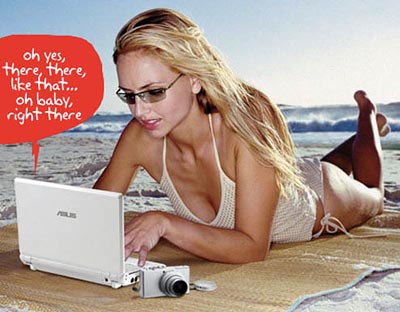 It was just yesterday that we caught wind of the touchscreen Eee PC. Sure, there were rumors before then, but it wasn’t until yesterday that we got some hard evidence. The panel manufacturers in China indicated that they were putting together an order for Asus and it seemed like all the pieces were falling into place. Rather than deny the rumors or choose not to comment, Asus has come out and confirmed that a touchscreen Eee PC is set for release some time this summer.

Kevin Lin, Asus president of sales, has announced that the upcoming 8.9-inch Eee PC will incorporate a touchscreen display, though there doesn’t not appear to be any indication that the Eee will suddenly become a convertible Tablet PC with a rotating display. Lin also mentioned the possibility of integrating GPS into the next-gen Eee, but this was not confirmed.

As suspected, the starting price for the 8.9-inch touchscreen Eee PC will be around $500. Lin went on to mention that the Eee Desktop PC would start at $199.