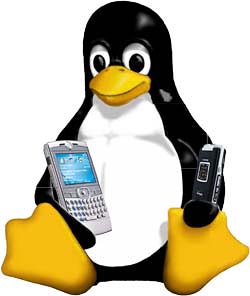 Most people probably think that Linux is the odd penguin out when it comes to operating systems. Everyone talks about the battle between Mac OS and Windows, but the penguin has a reasonable size of the pie when it comes to computer hobbyists and enthusiasts. As it turns out, Linux is making huge strides in the mobile phone department too, so much so that you may have a Linux-powered phone without even knowing it.

Crunchgear’s Matt Hickey recently posted up an editorial about this very subject, reminding us that “stripped-down versions of Linux are well suited for modern cellphones”, having already been implemented in handsets like the Motorola RAZR2. That’s right. That thing has Linux. Samsung also has a handful of phones that use different versions of Linux as well. The companies are, in fact, the founding members of the LiMo Foundation, a non-profit organization whose aim is to create a common Linux-based platform for mobile phones.

One of the keys to Linux’s success is that it is so modular. Beyond the basic kernel, builders are able to pick and choose which components they want to include. The open-source nature is pretty handy too. Beyond LiMo, there are other organizations that want Linux in your pocket too, like the Openmoko project and even the Google Android platform.

You will have a Linux phone in the near future, and you will love it, and that won’t make you a nerd.