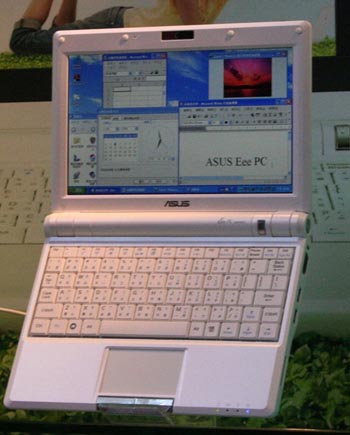 I don’t need to remind you about the success of the first generation Asus Eee PC, so it is with a fair bit of anticipation that we await the launch of its slightly larger successor. The new Asus Eee PC will come with a bigger display, we already know that, but it turns out that the display might be a touchscreen.

This is in sharp contrast to what Jerry Shen, President of Asus, said in January when he proclaimed that the next-gen Eee PC would not have a touchscreen. Even so, panel makers in China are indicating otherwise, because it sounds like Asus just put in an order. Better still, it’s going to be a resistive touchscreen and this new version is scheduled for launch some time in Q2 2008.

Perhaps the biggest indication that the next-generation Asus Eee PC will be rocking a touchscreen is the fact that this upgrade will cost Asus a mere $10 extra per unit. That’s dirt cheap, and you’ll know that the masses will love the extra functionality.