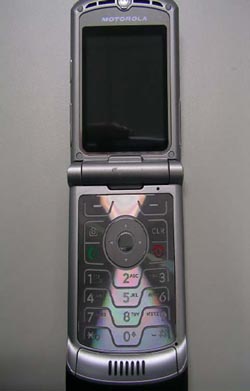 What do you do when your mobile division is having some trouble selling enough phones and coming up with enough innovative models? It seems that the strategy Motorola is taking is to simply take what was once a winning formula and tweaking it ever slightly. The net result is the new MOTORZR.

No, that’s not a typo. The new model is not a RAZR — perish the thought — because it is the all new RZR. Obviously, dropping the A is going to completely revitalize their mobile phone business and get people back on the Moto train. Then again, considering that the MOTORZR takes on exactly the same appearance and feature set as many of its RAZR V3 compatriots, it might not be all that popular.

The FCC just gave the RZR the thumbs-up last week, so it’s only a matter of time before it arrives at your favorite cellular service provider. Personally, I would have preferred if they dropped the second R instead. Then we’d have a Wu-Tang Clan member.