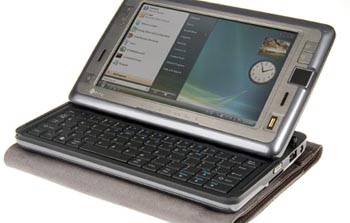 It’s not really a laptop, but it’s not really a smartphone either. The HTC Shift X9000 fits somewhere in between and it can now hop onto Sprint’s high-speed EVDO network for Internet connectivity anywhere you go. At $1500 through Amazon, the America-friendly version of the Shift is far from being the cheapest option on the block.

Laptop Mag had the opportunity to take the QWERTY-packing UMPC out for a test run and they conclude that it’s a “valiant first effort from HTC.” They applaud the web surfing experience offered by the Shift, saying that it is better than the OQO model 02 and the Samsung Q1 Ultra. Unfortunately, the keyboard isn’t the best and the “somewhat sluggish CPU sometimes has a hard time keeping up with Vista, especially with multiple applications open.”