The Saleen S5S Raptor looks like one serious supercar and if manufacturers like Ferrari don’t look out, they might fall prey to the Raptor. At the same time, I know that there is some major appeal to having a German or Italian supercar, and certain consumers will never blow that kind of money on a car that has such a strong connection to Ford.

Even so, the all-new Saleen S5S Raptor — which was unveiled at the New York Auto Show yesterday — is quite the sight to behold. It has much more aggressive lines than the Ford GT, offering a wide stance not unlike the Lamborghini Murcielago or the Ferrari F430. And it’s got plenty of grunt to back up that menacing look, generating a formidable 650 horsepower (at 6300rpm) and 630 lbs-ft of torque (at 4400rpm).

Inspired by the bird of the prey, the Raptor is powered by E85 gas, possibly making it a little more environmentally-friendly. The supercharged S5S is capable of doing the 0-60mph run in just 3.2 seconds before reaching a top speed in excess of 200 mph. A production version could hit dealerships in as little as two years with an estimated base price of $185,000. 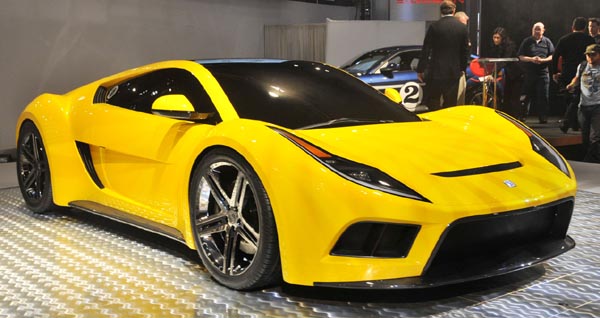