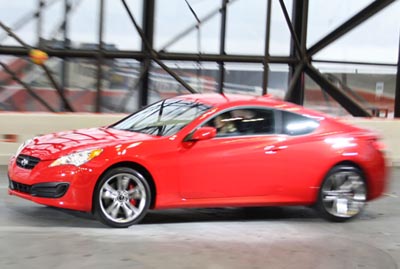 The 2010 Hyundai Genesis Coupe has made its official debut at the New York Auto Show this week and the Korean car manufacturer has introduced the sporty number in the most elaborate of ways possible. In the video clip below, you’ll see the Genesis Coupe tear it up on the stage, burning rubber and drifting into the laps of photographers.

Okay, so it doesn’t quite fall into the laps of the journalists, but they did get the female stunt drivers to perform a few drifts for the amusement of the audience. Hyundai wants to emphasize that this rear-wheel-drive coupe will be a lot of fun to drive, being a little more spirit into the company’s portfolio. The Tiburon, which the Genesis Coupe will replaced, was a relatively tame FWD sports car by comparison.

There are basically two models that will be available at launch. One will come powered by a V6 engine, whereas the other gets a turbocharged inline-four. Looks like Hyundai is making some pretty big strides!