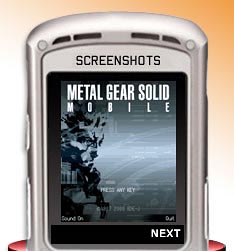 We’re still waiting for Solid Snake’s triumphant conclusion in Metal Gear Solid 4: Guns of the Patriots, but in the meantime, we can sneak around on our cell phones and feel just as stealty. Kojima Productions, the same team behind the popular console games, has developed Metal Gear Solid Mobile exclusively for Verizon Wireless.

The mobile game takes on the same atmosphere that you’ve come to expect from Solid Snake and the Metal Gear Solid series. Interestingly, players are able to shift the viewpoint from first to third person, soaking in all that pixeled 3D art at will. Furthermore, the game has been designed to take advantage of cell phone cameras: “Verizon Wireless customers can use their camera phones to capture images and the game will incorporate the image colors into the players’ camouflage system.” Wow, that sounds really lame!

Even so, being able to enjoy the stealthy world of MGS on the go is worth its weight in gold. According to Verizon, though, it’s worth $4.99 for monthly access or $10.99 for unlimited use.