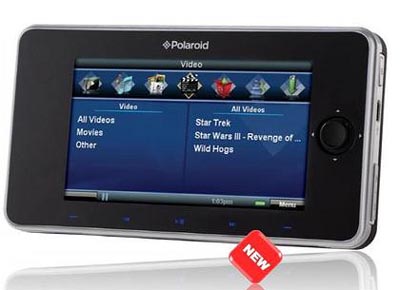 You may have heard that Polaroid has given up on its shake-it film business, but that doesn’t mean that the company is just going to crawl into a hole and die. Quite the contrary, because Polaroid is starting to expand its portfolio in all sorts of directions, and one endeavor that they are trying is the world of personal media players. This is in addition to their recent attempts at DVD players and digital cameras.

The Polaroid-branded PMP shown here comes with a rather conventional set of media-playing features. The color screen is a 4.3-incher boasting a 16:9 widescreen aspect. There’s 60GB of memory housed within for storing your usual smattering of music, pictures, and videos, including support for WMV, MP4, and DivX formats. The thick frame around the screen seems to make the device a little too bulky for its own good though.