It wasn’t all that long ago that Fido rolled out its 3G network. Shortly afterwards, the dog gained some knowledge of Windows Mobile, offering subscribers unlimited email starting at $15 a month. And now Canada’s favorite per-second pooch is learning another trick in the form of Fido UNO, a UMA service that allows unlimited local calls through a wireless (Wi-Fi) internet connection.

As you can imagine, Fido UNO works in much the same way as the T-Mobile @ Home service in the United States. Calls are automatically directed through either the GSM network or a Wi-Fi network when the latter becomes available. The soft launch of the service is set for April 2nd with the commercial launch scheduled for May 6.

There will be two Fido UNO pricing plans. The $15 option comes with unlimited local calling from home, whereas the $20 option adds unlimited Canadian long-distance calling from home. Two phones will be accompanying the launch. The Nokia 6301 candybar (launching April 2) will sell for $50, whereas the Motorola Z6w slider (end of May) will sell for $100. Both of those prices are with a three-year contract and both phones lack 3G. 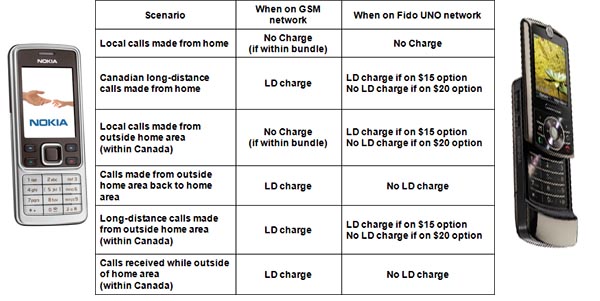