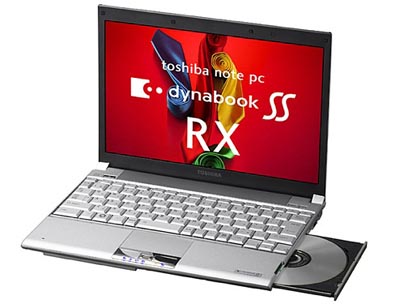 Even though they backed the now-failed HD DVD format, Toshiba still has a few positives to pick up their spirits. For instance, take the Toshiba Dynabook SS RX1 notebook. They claim that this is the world’s first laptop equipped with a 128GB SSD right from the factory.

Targeting a similar market as the Apple MacBook Air, the Toshiba Dynabook SS RX1 is remarkably slim as well, but the solid state drive housed within is twice as capacious as the SSD upgrade available for the MB Air. Furthermore, this 12.1-inch notebook comes equipped with an optical drive too (presumably not HD DVD).

Other features include a 1.2GHz Core 2 Duo processor, Intel graphics, up to 12.5 hours of battery life, and an option for CDMA-powered mobile broadband. If SSD isn’t your thing, you can downgrade to an 80GB HDD instead. The lappy should drop in Japan next month with a retail price of about $4,000.