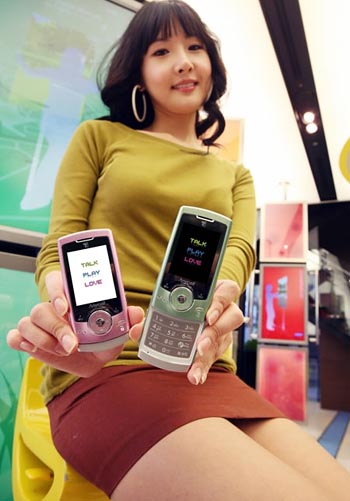 You horndog! You just want to see some pretty Korean girls in short mini-skirts, don’t you? Well, it seems that Samsung is willing to fulfill those wishes, but they’ve got to promote some of their products too, right? Strangely enough, the Samsung Miniskirt Season 2 has nothing to do with fashion, per se, but that’s the actual name of the new slider cell phone.

Yeah, it’s a terribly odd and confusing name, but it’s one that’ll grab the attention of both the gents and ladies in the audience. The Miniskirt Season 2 follows up on the original Miniskirt phone (duh) and as is the norm with Samsung, it’s a slider phone with a 10.9mm slim profile. The rest of the specs include a metallic keypad, 2 megapixel camera with smile detection, GPS with real traffic information, Bluetooth, and e-dictionary.

I could be wrong, but doesn’t the Samsung Miniskirt Season 2 look a little too much like the U600? It’s got the same touch-sensitive controls on the face and everything. In any case, the new phone is set to launch in KOrea for around 450,000 KRW ($450).