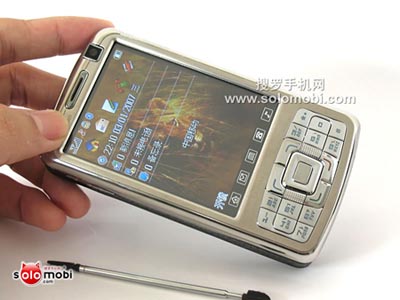 Smartphones seems to be a dime a dozen these days, even if they come with a touchscreen display and funky fireworks-themed wallpapers. What makes the LionKing800 particularly notable, outside of its Simba-inspired namesake, is the fact that it’s supposed to have a battery that will give you up to one year of standby time. As is the norm with phones, this probably dies down to something like 5 minutes of talk time.

The boast of 365 days of standby is largely unsubstantiated, but the developers are telling us that they have included a hefty 16,800 mAh battery to extend your life between charges. By contrast, the standard battery on a Motorola Q9h is a mere 1170 mAh. That makes the battery about 14 times juicier… which still doesn’t work out to one year of battery.

The rest of the specs on the LionKing 800 include dual SIM slots, microSD support, Bluetooth 2.0, 3.5-inch touchscreen, quad speakers, MP3/MP4 support, e-book reader, 256k color display, dual VGA cameras, GSM900/DCS1800, and GPRS data. Do battle with Scar and emerge with the LionKing800 for $145.