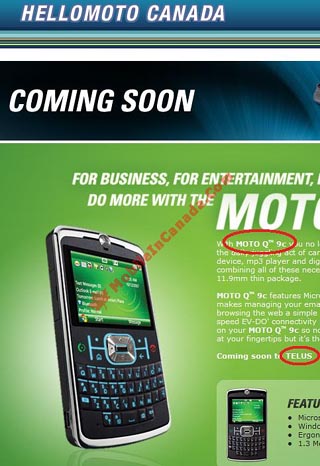 Both Rogers and Fido are already rocking around with a second-generation Motorola Q smartphone (Q9h), whereas Telus is still stuck with the first iteration of the slim handset. Where’s the love for CDMA users? After a little lobbying, it seems that the updated Motorola Q9c smartphone is making its way over to Telus Mobility.

The form factor is nearly identical to the previous model, but its outward aesthetics are a little more svelte. Other notable features include Windows Mobile 6, high-speed EVDO, a great QWERTY keyboard, and a 1.3 megapixel camera. This is unfortunate, because the Q offered by Rogers and Fido gets a 2.0 megapixel cam.

Chalk this one up as a rumor for now, but seeing how this shot comes straight for Motorola Canada and it makes explicit mention of Telus, I’d say there’s certainly some truth to this news.