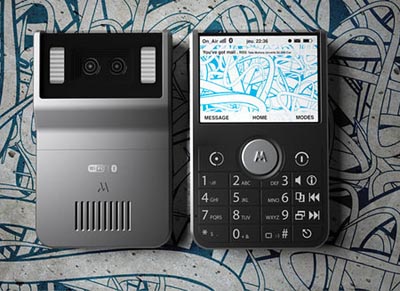 You’ve surely heard of stereo speakers on a cell phone, but this Motorola concept has to be the first mobile phone with stereo cameras! We’re not talking about dual cameras where there is one in the back for taking pictures and one in the front for video calls. With this concept, the two cameras are right next to one another.

What purpose these stereo cameras serve is beyond me. I’d imagine that with the appropriate software, you might be able to generate a 3D video by combining the two movie feeds, but that’s probably beyond what this phone can do on its own. Designed by Lysandre Follet, the Motorola concept phone also has Bluetooth, WiFi, email support, and a multimedia player.

I can’t imagine how useful such a contraption could be, but I am kind of digging the dual flash setup that flanks the pair of cameras. The form factor and layout look similar to the calculator phones from Samsung too.