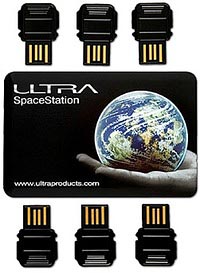 I realize that you’ll probably never need to carry around six USB flash drives at the same time, but I guess the people who developed this solution want to answer the question that no one is asking. The Ultra SpaceStation is a credit card-sized device that houses six individual flash drives, each with up to 2GB of memory.

We’ve seen credit card drives in the past, but most (if not all) of them have been singular devices. The Ultra SpaceStation, on the other hand, has six removable USB keys. The cheaper version goes for $60 and comes with a half dozen drives at 1GB each. For $30 more, you can get the beefy six-pack of 2GB drives.

This is certainly an interesting idea, but I’d imagine that it’s thicker than a regular credit card. At the same time, couldn’t you just buy one 6GB or 12GB drive instead of carrying around six for the same capacity?