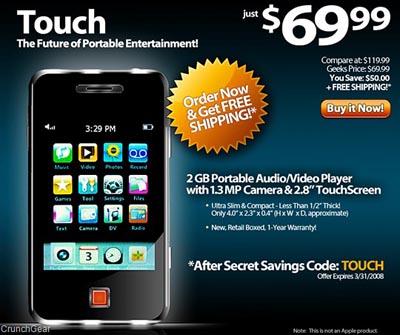 The good news is that this handheld costs a measly 70 bucks. The bad news is that the only relation it has with Apple is in appearance only, because this quite obviously an unauthorized knockoff. Available through ComputerGeeks, the unnamed portable media player invites you to “touch the future of portable entertainment.”

The home menu looks a lot like what you’d get on the iPhone or the iPod touch, and that large 2.8-inch display really is a touchscreen (although it’s probably not multi-touch). While there are some advantages to this device — it’s got a 1.3 megapixel camera and miniSD expansion slot, for example — but there’s a lot missing too. The storage is limited to just 2GB and the screen is smaller than the 3.5-inches on the iPod Touch. They’ve also neglected to include WiFi.