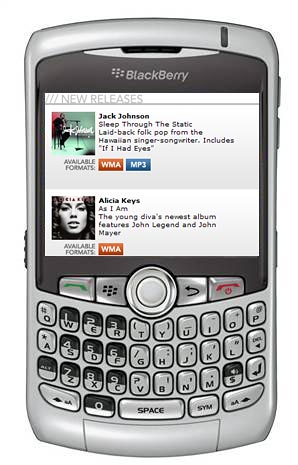 I never thought I would see the day. The BlackBerry series of devices from Research in Motion has traditionally targeted the business segment with its organizational features and push email. You may have noticed that RIM is slowly trying to position itself in the consumer market as well by adding more multimedia functionality and other doo-dahs that the average person would want.

The BlackBerry is slowly getting more musical and Canadian online music distributor Puretracks is pushing that transformation along with the announcement of a DRM-free BlackBerry music store. This announcement came at SXSW (South by Southwest). Puretracks is entering this venture in partnership with Magnet Mobile Media.

The Puretracks BlackBerry music store will be made available to owners of the Pearl, Curve, and 8800 series handsets initially, and the songs will come in the AAC/AAC+ format. The initial launch — April 1, no fooling — is set for the United States, but other markets (like Canada) are in the cards as well. They haven’t announced pricing, but it’ll probably be a buck a song, ten bucks an album.