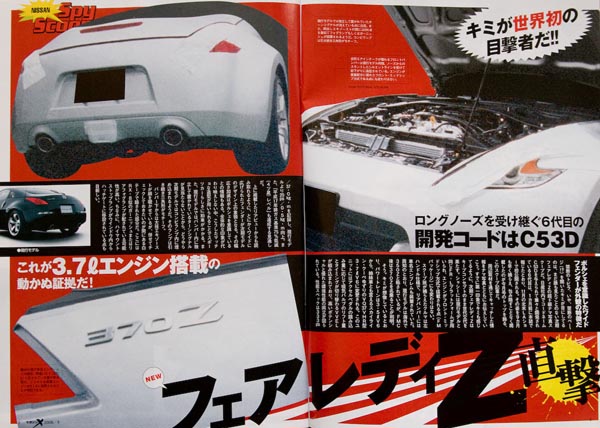 Just as the Infiniti G35 became the Infiniti G37, the Nissan side of things is about to undergo a similar transformation, emerging as the 2010 Nissan 370Z. The official reveal is scheduled to take place in about eight months, but a few magazine scans are depicting some leaked pictures of the hot new sports coupe. And yes, there are engine shot too.

It’s not a full reveal, because there are definitely parts of the car that still camouflaged, but one of the shots is showing what the headlight unit would look like without disguise. Developed under the codename C53D (not to be confused with C-3PO), the new Nissan Z will have the same basic shape as the current model.

The most notable change will be the implementation of the same VQ37VHR engine found in the Infiniti G37. This 3.7L V6 pumps out over 330 horsepower. Other upgrades may include “dramatic” LED headlights and a “stubbier” rear end.