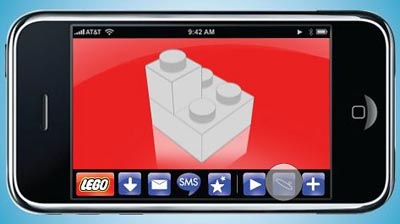 Toys. No matter how old I get, I will always want my toys. These days, “toys” would entail things like new video games, cell phones, and other gadgets. When I was quite a bit younger, however, hours on end would be occupied by snapping together a series of plastic blocks, letting me exercise my architectural skills on a much smaller scale.

One of the worst things about Lego is that you can make a huge mess with a pile of blocks. This virtual version of brick-connecting on the iPhone alleviates that issue while, arguably, maintaining the same level of creativity and fun. The demo site is pretty slow, but it does demonstrate what this software package could do.

I don’t anticipate that Lego for the iPhone and iPod touch will be able to usurp the PSP and DS Lite for mobile gaming supremacy, but with the release of the SDK, it could be just a matter of time before Sony and Nintendo have something to seriously worry about.