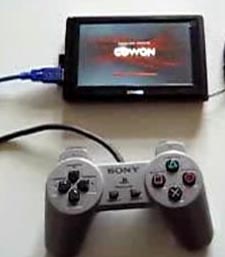 Talk about fusion! The Cowon Q5W is officially billed as a portable media player, but this version has been outfitted with an SNES emulator for all your mobile gaming needs. The Super Nintendo (Super Famicom in Japan) was a great source of games, including Street Fighter II, Donkey Kong Country, and F-Zero. And now you can take that action on the road.

Interestingly, this modified Cowon Q5W does not get you to use an old SNES controller for your gaming action. Instead, it uses an original Sony PlayStation (PSX) controller. Weird. This is probably the only time that you’ll see Sony and Nintendo playing nice with one another, albeit not officially.

The PMP goes for a retail price of $550+ and that’s before any of the modifications, so if you really want to get in on some SNES emulation, it might be a better idea to opt for a hacked PSP.