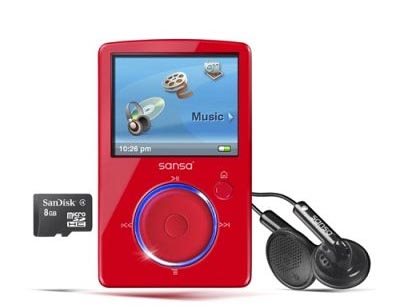 You could say that the Sansa Fuze is SanDisk’s answer to the third-gen iPod nano, but up until now, we have heard much in terms of confirmed specs. While we could sit around, twiddling our thumbs until SanDisk issues a press release, it’s probably easier to just to peek the deets leaked out by the guys at Amazon.

The popular online retail outlet has leaked a bunch of specs surrounding the SanDisk Sansa Fuze and it sounds like it could be a nice iPod alternative, especially for anyone who is particularly anti-Apple. For starters, we hear that this portable music/video player comes with a 1.9-inch color screen, FM tuner, and a voice recorder.

Better yet, there is a slot in the Sansa Fuze for microSDHC expansion, potentially opening your portable music collection to much bigger proportions. They’re currently showing red, black, and pink variants, though more colors are expected too. The 4GB model is being listed at $99.