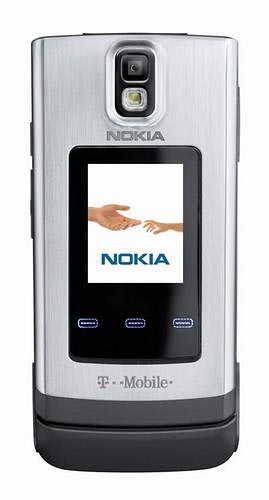 Well, sort of. I can’t be the only one who thinks the thin flip phone format is a little played out by now, but that hasn’t stopped T-Mobile from picking up the Nokia 6650. As you can tell from the picture here, the square-ish form factor makes for a rather unassuming presence, but the features aren’t too bad for what appears to be an entry-level handset.

The clamshell definitely has a multimedia slant to it, because you’ll find niceties like a 2 megapixel camera, built-in aGPS, FM radio, music player, Bluetooth technology, microSD expansion, and what look like external media controls. There’s also a 2.2-inch QVGA display and a variety of integrated T-Mobile services.

As far as we can tell, because this phone was on display at CeBIT and it boasts a Euro-friendly HSDPA connection, the Nokia 6650 is set for release across Europe rather than the United States. Look for it in Q3.