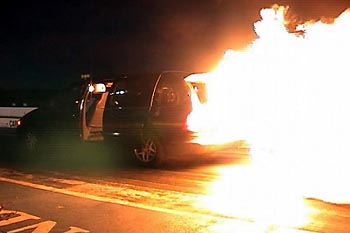 This is pretty much an exercise in outrageousness, but isn’t that the case with most car modifications? Someone has decided that the soccer mom image wasn’t really for them, but they didn’t want to go with a sports coupe or even a sports sedan for their high-powered vehicle.

Instead, they took a Dodge Caravan and outfitted it with a jet engine, effectively letting the van complete a quarter mile run in a mere 11.17 seconds. The jet engine takes up quite a bit of space in the back, but that’s the price you pay to harness 1000 horsepower. One thousand horsepower. Geez Louise!

The jet engine itself is a government surplus turbine. The flames, they say, are “courtesy of judicious use of fuel sprayed into the helicopter engine’s exhaust.” Realistically, the flames are all for show and really do nothing for the acceleration.