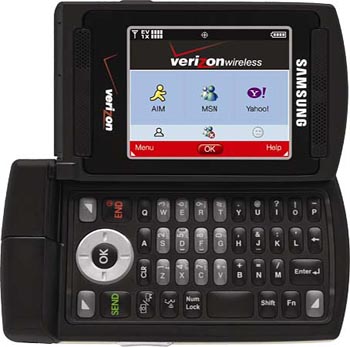 In case you haven’t noticed, Verizon Wireless has decided to go against the grain and not name their cell phones based on letters and numbers. Hearkening back to an earlier age, the checkmark of a service provider has gone around re-dubbing their entire lineup with trendy and “hip” names, possibly hoping to attract some of the younger demographic.

We’ve already seen this with phones like the LG Venus and LG Voyager, so it’s only fitting that Verizon has decided to give a new name to the Samsung U740 as well. Henceforth, the dual-flipping phone with a QWERTY keyboad will be known as the Samsung Alias. Presumably, it’s the Alias because of its dual personality; you flip it one way to make a regular call and you flip it the other way for your messaging needs.

Other than the name change, nothing else appears to be altered in Samsung U740 Alias land.