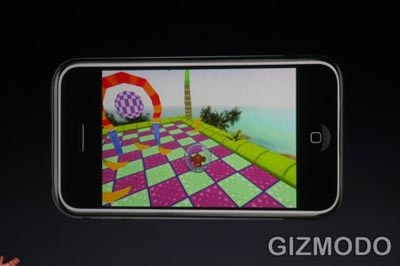 Turns out that Trism isn’t the only motion-sensing iPhone game to utilize touch controls too. Big dogs like EA and Sega have signed up to create games for the Apple iPhone and these titles are set to take advantage of both multitouch and the tilt sensor.

In the announcement coming from Steve Jobs, he says that upcoming mobile games for the iPhone will include such popular titles as Super Monkey Ball and Spore, both of which should be available through the iTunes App Store. The iPhone-flavored Spore is said to be a full build of game, complete with all 18 levels.

Super Monkey Ball looks like it could be a perfect implementation of the accelerometer, but I wonder how Sega will go about using the multitouch interface. In any case, be on the lookout for more innovative (casual) games as they get released.