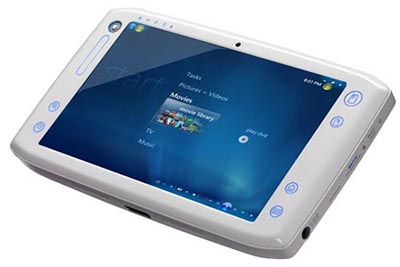 Despite what some people may lead you to believe, the Asus Eee PC isn’t the be-all and end-all when it comes to ultraportable computing. Over at CeBIT in Germany, Gigabyte has just unveiled their new M700 UMPC.

Like so many other mini-tablets before it, the Gigabyte M700 UMPC gets outfitted with a seven-inch (touchscreen?) display, but it pushes the processing envelope a little further by running a full build of Windows Vista Home Premium. This is achieved through the 1.2GHz Via C7-M processor and 2GB of memory standard. The seven-inch screen has a resolution of 1024×600 pixels.

Weighing it at only 1.43 pounds, this UMPC also comes loaded with dual webcams, GPS, and a WiMAX-capable ExpressCard. There’s no QWERTY keyboard, so you’ll probably have to make do with one of those on-screen virtual numbers. No details surrounding pricing or release dates were announced.