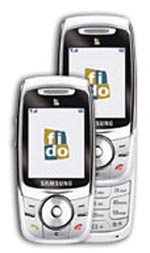 With all this hullabaloo about having a high-speed 3G wireless connection, it’s a little curious that Fido has decided to launch the 3G-less Samsung SGH-E747. The slider phone has a form factor similar to the D600 from a couple of years back, but you would think that they’d get a 3G model for Fido subscribers.