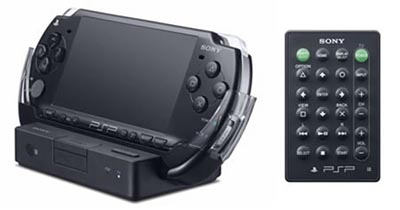 When the slimmer and lighter Sony PlayStation Portable was announced, one of the most notable features was TV-out. This further solidified Sony’s stance that the PSP was more than just a portable gaming machine; it’s meant to be a full portable entertainment system. By connecting the PSP to your TV, you’re almost getting a truly portable PlayStation 2.

But what is the best way to enjoy your PSP’s “quality entertainment content” on your TV at home? Sony is finally coming to the rescue with a box set that contains both a PSP cradle and a D terminal AV cable. This cradle, which comes with a wireless remote, helps you ease the connection to your TV. This dock would be similar to the ones you’d find for an iPod or some other PMP.

There are two versions that will be available in Japan starting on April 24th. The cradle by itself will retail for 4800 Yen, whereas the one that comes bundled with cables sells for 6500 Yen.