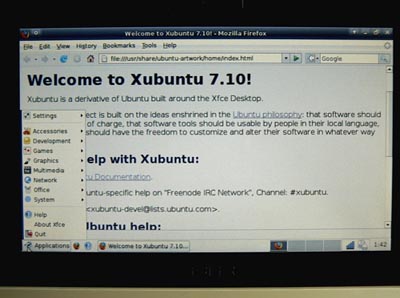 The Asus Eee PC is nice and all, but not everyone likes the Xandros OS that comes out of the box. If you’re not digging that build of Linux, you can quite easily install Xubuntu 7.10 instead. This is a viable option for those who aren’t interested in Windows XP either.

Kevin from jkONTheRun feels that Xubuntu is a better Linux option for mainstream users because it’s quick and “more Windows-like” than the Xandros build. This lowers the barrier of entry for people who aren’t as accustomed to a Linux environment. The only snag is that a Verizon USB727 EV-DO card doesn’t seem to work with Xubuntu, so you might want to stick with XP for that reason.

For those who want to make the jump to Xubuntu, there is a wiki page with a custom-build of the OS specifically for the Eee PC, complete with all the drivers.