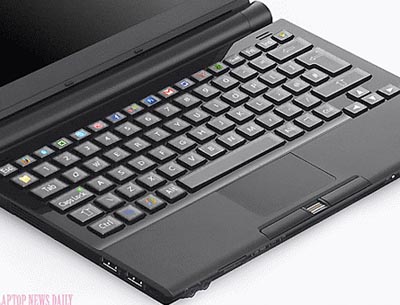 Well, this only makes sense. Just about every other innovation that has hit the desktop scene has eventually filtered its way down to notebooks, so a customized keyboard should be no exception. As you recall, the Optimus Maximus keyboard doesn’t have functions permanently mapped to each key. Instead, each key boasts a mini LCD screen so that you can completely customize what it’s used for.

In the example shown here, you’ll see the function keys have been replaced with quick access buttons for Firefox, Excel, Skype, Facebook, Gmail, and so on. Because there are tiny LCD screens, the customization can be nearly instant and you never have to wonder what each button is used for.

As far as I can tell, this is not an official release just yet and if it were to launch, the premium would be a fair bit higher than what most people would be willing to pay. Even so, I think a notebook-happy Optimus Maximus would be pretty nifty.