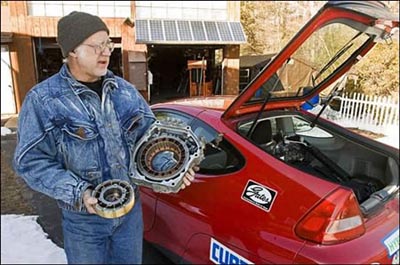 If Mr. “Insight Guru” Dabrowski had his way, you’d be paying a visit to the pump far less often. That’s because he has developed not one, but two systems that drastically improve the fuel economy on Honda’s first hybrid car.

Production on the Honda Insight stopped in 2006, but Mr. Dabrowski has been hard at work making the 57mpg car even more fuel efficient. The first solution, called Manual Integrated Motor Assist System, gives the driver the ability to manually adjust the gas-to-electric ratio. He says that this can improve mileage by an average of 10-20% on Insights, but it has been known to get as good as 100mpg. About 60 Insights use the $750 system and there is a waiting list.

Pushing it even further, Dabrowski has also developed a fifth wheel that drops out of the trunk and it is used to generate electricity for the car. This allows the car to run almost exclusively on electricity, getting as good as 180 miles on the gallon at slow speeds on flat roads. This concept is not for sale.