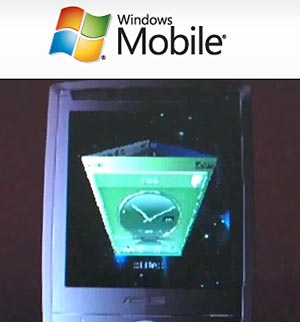 One of the common complaints about Windows Mobile 6.1 is that while it may be reasonably functional, it’s far from being any sort of eye candy. Just as HTC did with their TouchFLO interface, Asus has designed a funky three-dimensional touchscreen user interface that lies overtop the Windows Mobile 6.1 core.

This extreme makeover from Asus borrows several elements from competitors. For example, they’ve altered the TouchFLO cube into some sort of triangular prism. The flicking gestures can also be compared to the user interface on the Apple iPhone. Some have even made comparisons to CoverFlow.

There are several customizable elements to the Asus Windows Mobile 6.1 GUI, including a Multi-Home 3D interface “meant to simplify access to your today screen, life and business applications.”