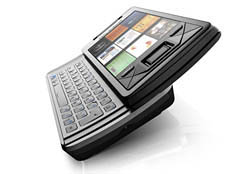 There was a rumor floating around over the weekend that the HTC-produced HTC Xperia X1 super smartphone would be delayed until late 2009, much to the display of sliding QWERTY users around the world. Thankfully, Sony has come out and said that their new smartphone will not be delayed and it is still on schedule for release later this year.

The initial rumor was started by the unofficial guys at the Sony Ericsson Blog, because they spotted a release date of 10/02/2009 on an official SE webpage. That rumor has now been crushed and Sony Ericsson will probably just blame it on a typo or something.

Thank goodness. The Sony Xperia X1 is still a hot looking Windows Mobile 6 device today and it should still be pretty attractive later this year, but if they were to push the release to late 2009, it just might have to compete with a third-gen iPhone or something.