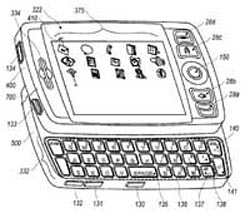 Seemingly taking a page out of HTC’s playbook, Research in Motion has filed a patent for a new BlackBerry that features a slide-out QWERTY keyboard. This would represent a first for the company, because BlackBerry devices have — up until now — adhered to the standard fat candybar form factor.

As you can see from the patent drawing here, the display would automatically orient itself as landscape when the QWERTY is unleashed. This would also mean that users could gain access to a significantly larger display and that display could be a touchscreen.

Many smartphone manufacturers have started to adopt this sliding form factor — Samsung Glyde, Helio Ocean, HTC TyTN, etc. — so it’s only natural that RIM wants a piece too.