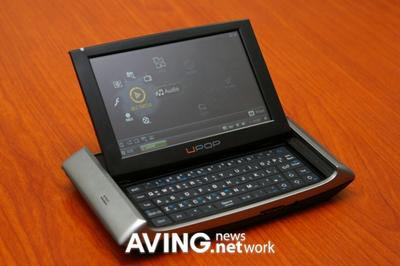 Although the UPOP from KaonMedia is officially billed as a personal media player (PMP), the QWERTY keyboard should indicate to you that this device can do more than just play music and videos. Featuring a 4.8-inch widescreen display, the UPOP has a unique slide-and-tilt function that is not unlike what you find on the HTC TyTN II (AT&T Tilt).

The display boasts a formidable resolution of 800 x 480 and it happens to be a touchscreen too. Largely targeted at the Korean market, the UPOP comes with e-dictionary support for up to 46 different types of dictionaries. Other features include a DaVinci chipset for video, T-DMB with time-shifting, the ability to be used as a portable PVR, text-to-speech, image/text viewer, calculator, calendar, and more.

I’d say that the KaonMedia UPOP PMP is quite the gadget. All it needs now is some WiFi, Bluetooth, and cellular and you’ve got yourself the ultimate mobile companion.